The Father Christmas Letters by J.R.R. Tolkien (alternate title: Letters from Father Christmas) is a delightful volume for personal or family reading during the Christmas season. With Tolkien’s skillful storytelling abilities and charming illustrations, the book can quickly become a holiday favorite. In this post we will explore some of the historical context for the letters and provide a brief overview of the book.

Each year in the Tolkien household from 1920 until 1943, Tolkien’s four children John, Michael, Christopher, and Priscilla could expect a letter delivered to them from Father Christmas (the name for Santa Claus in England), complete with news about the happenings at the North Pole over the past year and accompanying illustrations. Each letter was carefully written in the shaky handwriting of Father Christmas (for he was over 1900 years old after all), and bore an “authentic” North Pole stamp. Sometimes the letter would appear in the home dusted with snow or with snowy footprints across the floor; other times it would be delivered by the postman, making the arrival seem very official. The children’s own letters to Father Christmas would likewise disappear from the fireplace and make their way magically to the North Pole with their own news and Christmas present requests. When the elder children stopped writing to Father Christmas, all family members encouraged the younger ones to keep up the correspondence, maintaining the delight of the holiday ritual.

The content of the letters varied over the years as Father Christmas moved house, had several adventures, and gained more members of his household and the North Pole community. Characters mentioned include Snow-elves, Snow-men, Red Gnomes, Cave-bears, Goblins, and Father Christmas’s personal secretary, an Elf named Ilbereth. One character who maintains a consistent presence in the letters is Father Christmas’s assistant, the North Polar Bear. Some of the most memorable letters include stories of how Polar Bear’s foibles and curiosity often, while trying to be helpful, lead to accidents and disasters. These include causing the North Pole to break and fall on Father Christmas’s home, falling down a staircase with a pile of gifts, letting the bath water overflow, and setting off two years’ worth of northern lights all at once. These accidents sometimes account for deficiencies in the gifts Father Christmas has brought the Tolkien children, and in other cases are meant solely for comedic and dramatic purposes. Polar Bear offers his own commentary with his distinctive angular script in the letter margins, with occasional contradictions of some of Father Christmas’s accounts of how the accidents happened.  Polar Bear proves very helpful in later North Pole events, however, when he battles invading Goblins. His nephews, cubs Paksu and Volkotukka, also join Father Christmas’s household in later letters.

And with every letter, Tolkien’s accompanying artwork brings the story to life in enchanting ways. As many readers may already know, Tolkien created a great deal of artwork for his writings such as The Hobbit, The Lord of the Rings, The Silmarillion, and other tales he wrote for his children like Mr. Bliss and Roverandom. He studied art from an early age with his mother and it remained part of his creative expression throughout his life. Seeing Tolkien’s depictions of the Aurora Borealis blaze in full color over the North Pole horizon, or Polar Bear in the thick of a goblin battle, adds greatly to the reader’s enjoyment of the tales, as the illustrations must have done for the Tolkien children as well.

Several editions of The Father Christmas Letters have been published over the years, and a few of those are shown here. The most complete collection to date is the HarperCollins 1999 edition (blue cover above) with a cover depiction of Polar Bear after toppling down the staircase with a trail of crushed gifts in his wake. Variant editions with a unique aesthetic appeal include the HarperCollins 1994 edition consisting of three miniature volumes in a boxed set; and the CollinsChildren’sBooks / Houghton Mifflin 1995 edition, featuring facsimile envelopes with individual letters to pull out and read. 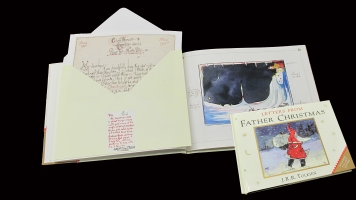 Whichever edition finds its way to your home, the Wade Center recommends sharing it with loved ones and having a ready supply of hot cocoa to accompany the reading sessions. We’ll let Father Christmas have the last word: