Skip to content
The Wheel of Time series is one of the biggest selling fantasy franchises, with over 80 million books in the series sold, and published in over 20 languages. Jordan (real name James Oliver Rigney) is considered one of the masters of epic fantasy, and along with R. R. Martin, ranked as one of the nearest rivals to Tolkien. But despite this acclaim, there is a very polarized community; The Eye of The World seems to be a book people either thoroughly loved or thoroughly disliked.

The prologue opens with a scene from the past, showing a mighty battle between two wizards. Despite the aesthetically exciting scene, it felt flat and lacked the emotion or context to grab my attention or to make me care about either side. The characters spoke a lot of hackneyed “Epic English” which I found was more distracting than engaging. Though it was a valiant attempt to hook the reader with action and sorcery, it felt overdone, and I found myself uninvested. But, to it’s credit, it also lets the reader know that there is something more going on in this story than just the typical Good vs Evil battle; we see a glimpse of Jordan’s magic system and we know, right off the bat, that we can expect something different from the standard Fantasy tropes in this book.

The first chapter is juxtaposed nicely against this introduction; we are transported to the countryside, and straight into what feels like a homage to The Fellowship of The Ring. As I kept reading I found there were parallels, not just in the dynamic use of mythic structure or the heroes journey, but direct parallels between locations and characters and plot. Jordan once said in an interview that the start of the book was supposed to mirror The Shire, and that the parallels to The Lord of The Rings were a conscious choice, to give the reader a feeling of familiarity.

“The Lord of the Rings is a milestone in the genre and in a sense laid the groundwork for what we currently call fantasy. The first 100 pages of The Eye of the World are quite similar to it. In it, you’ll find the idyllic, pristine world as in the world of Tolkien. But from that moment on, the story takes a completely different turn.” [Robert Jordan, Dromen and Demonen Interview, April 2001]

Well, he certainly achieved his goal, but unfortunately, he forgot to stop at The Shire, and his watered-down versions of Tolkien’s archetypal characters continue their journey through towns and hills and mountains that all bear glaringly similar names and functions as Middle Earth. By the time Jordan’s story diverges from his fan fiction and his characters finally begin to take shape, becoming more than just cardboard cut-outs of Tolkien’s creations, it is too late. So far are we into the novel before getting to actually know our protagonists, that it is hard to care for their plight, or share their concerns. And this is what made it so hard for me to invest in this journey; the ‘familiarity’ Jordan sought through intentionally imitating Tolkien merely distracted me. I found myself, not feeling nostalgic or comfortable, but bored and disinterested. I was unable to be taken by his characters or his world. And that is a shame, for his world isimpressive. Despite the long journey through Jordan’s Middle Earth, there are a few unique aspects to this world that I enjoyed, such as The Blight. It is a vast area around a source of evil magic where, as the heroes venture deeper into the forest, it becomes more decrepit; rot and ooze and decay and fungus everywhere. It is a scene that evokes some excellent imagery and I would have enjoyed a longer visit to this dying and corrupted land. 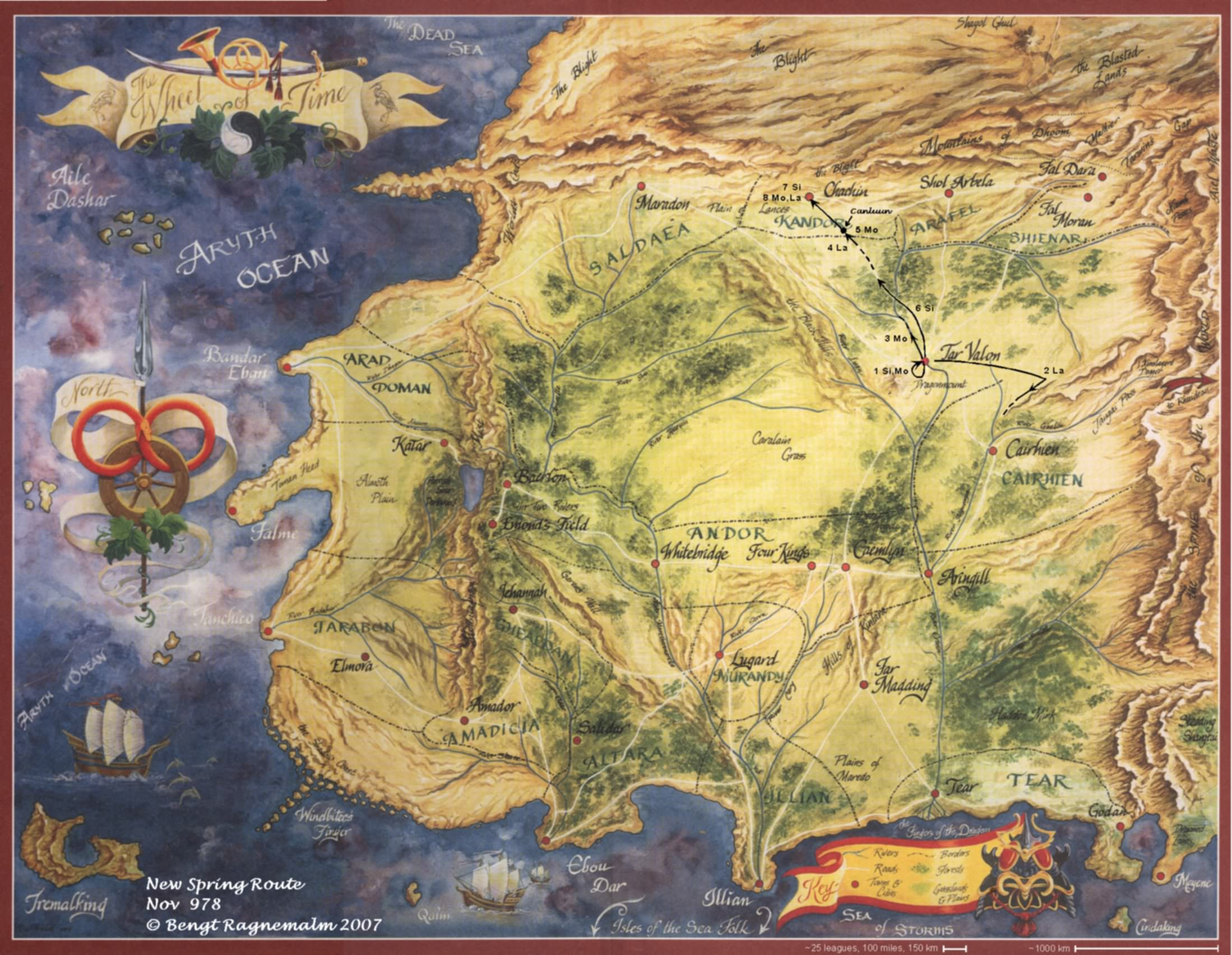 Also, there is an organic, believable relationship between the people and the culture and the geography of the world. The philosophy and magic takes it’s roots from, not just European mythology, but Eastern and Oriental as well. Jordan is probably one of the earlier mainstream writers to incorporate Eastern mysticism into his fantasy novels, and while not being just an aesthetic or relegated to being some gimmick, it gives the world a truly exotic feel. A keystone of epic fantasy is not just the magic, but how it is represented, and how it works on a practical scale. Jordan provides us with a new and original take that is refreshing. There is no argument here: his world building skills are unquestionably high; up with Tolkien or Martin or McCaffrey.

I would recommend this book, if for no other reason, so you can say you gave it a go. Ultimately, everyone has a different opinion; subjective to ones own experiences and expectations. For me, I was expecting this book to be able to entertain me and make me want to read more, and that expectation was not met. It has been argued by many fans, that to fully appreciate The Eye of The World, you need to read the whole series, and that this was Jordan’s book for laying the groundwork for his Wheel of Time saga.

Unfortunately, most other competent authors have proven that it is easy to provide the groundwork in the first novel of their own series, whilst still delivering an exciting narrative filled with complex and multifaceted characters, and while challenging the reader through the subversion of common tropes, and the inclusion of original and exciting ideas. This book worked on many levels, but sadly, failed on so many more. Jordan is enormously popular and is a highly competent writer; unfortunately this book is not the vessel in which he demonstrates this.